The end of our time in Korea is getting close and we haven't really mentioned much of the crazy technological approaches Koreans have to solving problems. South Korea is the home of LG and Samsung, and therefore you can expect to see a lot of clever little gadgets that are nowhere to be seen in the western world.
We will start with the yogi-yo button. This is prevalent in about 75% of restaurants and is a button that you push to get the attention of your waiter, who then comes scurrying over to see what you need. This saves the hassle of shouting or trying to catch their eye as they whiz past. 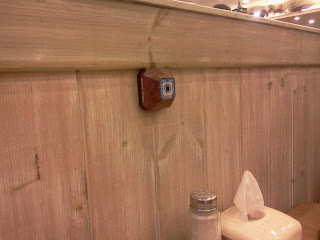 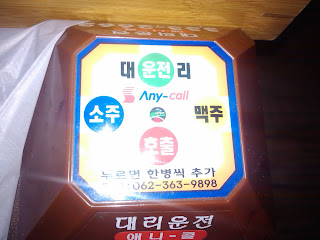 This is a more advanced version, with 4 different buttons, representing 4 different requests. Note that "soju" and "beer" each have their own buttons.
Mini-toilet – Katie saw this and it’s brilliant. Not exactly high tech but everyone loves a portable piss pot. 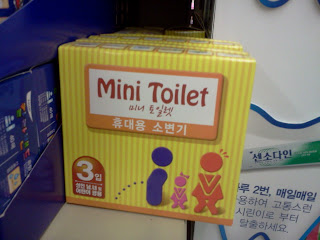 Carousel Car Parks – I’ve mentioned this one before but it has to be brought up again. When space is tight, building a car park that acts like a fairground ride is just genius.
PS3, Wii and Xbox Rooms - Pay about 80p an hour to play a huge selection of games on any console. These are amazing and it's a shame that I have only just discovered them! The rooms are kitted out with dozens of huge plasma screens and comfy sofas, making them a great place to chill out with friends. 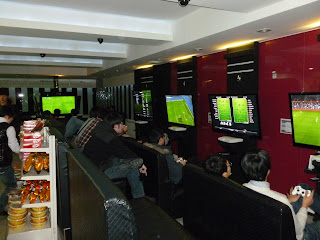 They have snacks and drinks as well. No beer unfortunately.
Probably a blessing though or I would skip travelling and live in one of these for 5 months.

Hand towels in pill form – Just add water to these tablets. Again they exist in the UK but when do restaurants give them to you instead of a normal wet towel? In Korea, it happens often.
Phone Charger
Korea is more than a little obsessed with mobile phones so it doesn't come as a big surprise when you are climbing a mountain and come across a phone charger...powered by cycling... 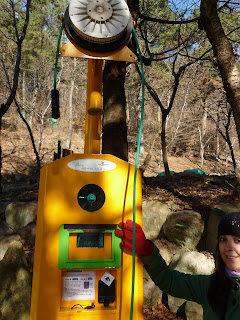 Or power it by milking a virtual cow.


Disposable umbrella covers – Koreans use umbrellas more than any other nation on Earth, so it is no surprise that most stores will have one of these at the entrance. 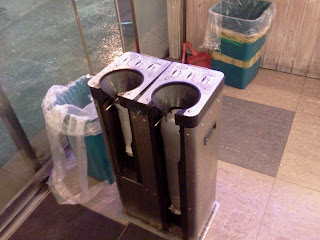 Store your umbrella in a disposable plastic bag so you don’t get everything wet as you walk around the shop. Don’t worry environmentalists, when you exit there is a box to put your carrier so it can be recycled / re-used. My only issue with them is that they happen to look like horse condoms...
As well as ingenious gadgetry, there is also an abundance of useless tech. For every Dyson vacuum, there are dozens of pairs of umbrella shoes. 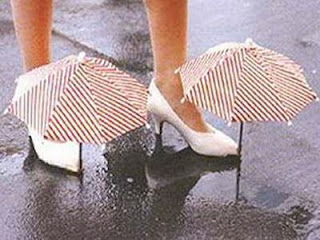 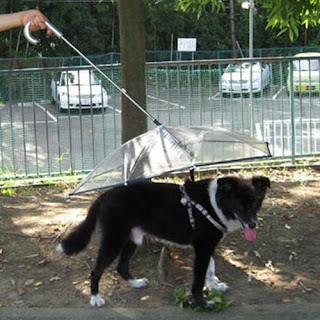 Here are a few of my fave useless / pointless inventions:
TVs Everywhere - We start with an expensive way to advertise. Adding a little TV on the majority of payphones so that they can display an advert – so pointless. Especially when you consider that almost every Korean now owns a mobile phone. Who uses payphones anymore?! 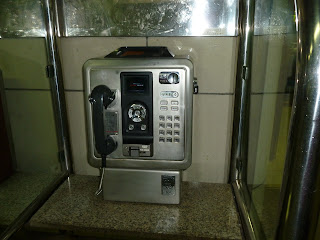 Some sections of the subway even have TVs full of advertisements that you can watch as you speed past.
Kinda cool but very pointless.

Brightly lit shop – If the mini TVs don't work, you can always have the brightest shop in the world. I took this photo from a moving bus (hence the bad quality) - I was snapped out of my commuter-stare-into-space by this ridiculousness. 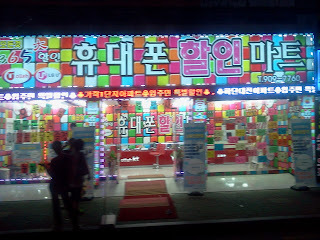 Luckily electricity is cheap in Korea or he’d be out of business. I wonder if he has a sideline hobby of collecting moths…
Dancing Robotic Statues
To advertise your shop, what works better than a dancing robotic bear!? This is the craziness that is South Korea and it's strange stance on advertising.
I even found the shop that sells the dancing bears. 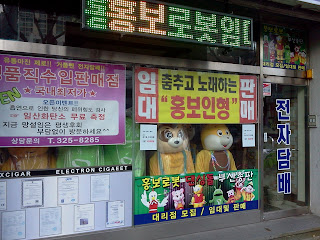 Ironically it didn't use a dancing bear to advertise.

My School's Printer
I put this in because it makes me laugh every time I use it. 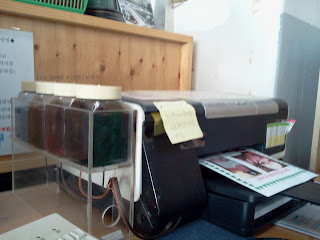 I have never seen a colour printer that is connected to jars of ink before - maybe I have lived a sheltered life...

Arcade Games - Don't get me wrong, I love arcades with a passion. What I think is a little strange is that outside EVERY convenience store, there is some kind of arcade game. Normally just a "swallow your money while you try to win a cheaply made stuffed toy" game and I hate those. Give me a Tekken or tennis game any day.
I took all 4 photos on my walk from school to the subway station. In other words - there is a shit-tonne of old arcade machines.

Musical Toilets - We have already shown you the digi-bog and its features, but here is something I found on the back of a cubicle door. This is one for the ladies. It's is an unnecessarily bulky sanitary bag dispenser with a built-in boom-box. Ok, not quite a boom-box, but it played music (rather than the usual flushing water sounds) to disguise your tinkling and the whole thing took up way too much space in the already cramped cubicle. Having said that, I prefer it to the mirror that is usually there. It amazes me that Korean women have the balance and poise to squat, wee, smoke and put on make-up at the same time. I'd be more impressed if all this didn't mean I always have to wait ages to have my turn! 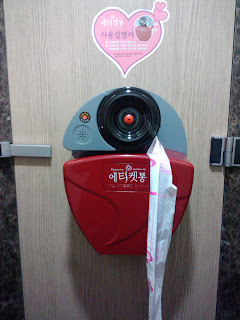 Tablet computers – Now I know that iPads and Galaxy tabs exist in the western world but only in Korea do you find entire carriages of trains using them. You often get bumped into by people who are walking while watching TV on their screens. They get TV straight to their phones as well to fulfil all their Korean soap opera needs.
What I found interesting is that on the subway in Tokyo, a city that I imagined to be far more technological than Busan, almost everyone was reading real life books, with pages and bookmarks! There were hardly any smartphones or iPads in sight.
Styler – For 300 pounds you can buy a high tech wardrobe. 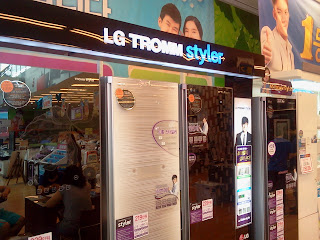 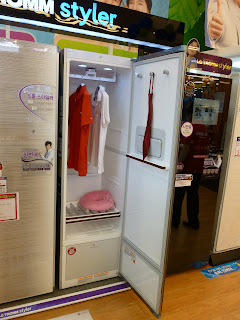 It doesn’t have an entrance to Narnia at the back but it does have some useful features. 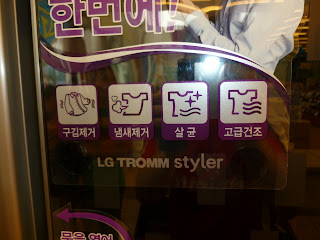 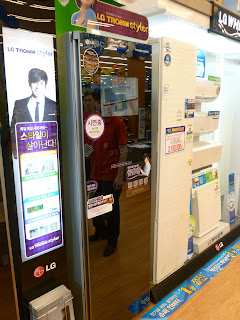 I also doubles as a mirror… ooooooh shiiiiiny!


Happy 2012 and hopefully we'll see some of these technologies when we return  to the UK in July!